An Open Letter to the People of Japan

As is often the case, we (the People of Japan as well as those who shaped your destiny) must look back into history to fully understand the developments surrounding the current nuclear crisis which has so paralyzed your country in the wake of the March 11thearthquake and tsunami.  We are compelled to first look directly into the events leading up to the dropping of the atomic bombs by the US Military on both Hiroshima and Nagasaki at the end of WWII.  When these two unprecedented and horrific events are put into proper perspective, the truth about your unfolding state of Nuclear Armageddon will become transparent.

From Hiroshima to Fukushima

First, here are some facts which are conveniently omitted when our side retells the history of one of the most heinous crimes perpetrated in world history.  These two aforementioned war crimes were committed against strictly civilian populations during the final phase of the Asian theatre of WWII, when it had already been determined that the conflict was decisively won by the Allies.  Quite a shocking statement, isn’t it?!  However, an objective and honest assessment of all the information available conclusively shows that this crime of genocide was totally unnecessary on any grounds whatsoever.  Truly, these atomic bombings constituted deliberate acts of state-sponsored terrorism wrought on a nation-state to traumatize it and subdue it into complete submission.

So, why did the USA et al. do it?  Is there any doubt that the twin engines of economic growth after WWII could be found in the nations dealt the heaviest blow by that war?  Clearly, Germany and Japan were transformed into the economic powerhouses of both the European and Asian realms respectively.  This occurred only after each nation was ruthlessly savaged by acts of war which were as apocalyptic as they were unparalleled.  Whether we consider the fire-bombing of Tokyo, the carpet-bombing of Dresden and obliteration of Berlin, or the atomic bombing of two civilian centers in Japan, we are left only with the stark and brutal reality that these events were pre-planned with precision and designed to produce a specific outcome.

When acts of such wanton barbarity are committed which so pummel a national consciousness, they are typically conceived and executed with the explicit purpose to shock and awe the victimized population.  Then the defeated nation will quite willingly go along with any plan of redemption that the victor places in front of them.  And this is exactly what happened in both the case of Japan and Germany post WWII.  If they had any hope of survival, or future prosperity, the ultimatums made it clear that they would comply with the wishes of their new masters or else face an uncertain and miserable fate.  And so the modern-day plantation was born onto the lands of these two humbled nations which had suffered so much physical destruction, as well as psychological pain and suffering.

The agreements that were reached all revolved around a contract that assured both nations that, if each performed well (e.g., complied with the NWO game plan/maintained an exemplary plantation for others to emulate), they would be granted a prominent place at the table of civil society of Western civilization.  Of course, both were effectively occupied by foreign troops during the entire period of their rehabilitation, so it is easy to understand what can be coerced at the barrel of a gun.  Nonetheless, Japan and Germany were eager to take their place as good and upstanding world citizens contributing significantly to the rapidly emerging consumer society.

Energy is required to run the slave colony, especially the factories.

Japan, perhaps more than any other modern and highly industrialized first world nation, was well known for possessing the scarcest amount of raw energy resources (the “surprise” attack on Pearl Harbor was conducted because of this fact).  Being an island nation has its own and self evident drawbacks concerning power-generating resources and technologies which are, at once, cost effective, practical and sufficient.  Especially in the case where Japan had been selected to occupy a lead position in serving the ethos of consumerism, does this quandary around energy pose an extremely serious set of problems.  You can’t run a factory without electricity, can you?

This brings us to where the plantation master (USA) imposed an arrangement upon an unfortunate slave colony (Japan) – a deal which would have profound and earth-shattering repercussions for the colony’s very existence.  Through all the “discussions and negotiations”, it was determined that nuclear power generation was going to be a preferred mode of running Japanese society.  Once this decision was made, the Anglo-American corporations (who really run the show in Japan), in collusion with the homegrown purveyors of disaster capitalism Nippon-style, simply foisted nuclear power plants on the four corners of this island nation, and everywhere in between.  Quite purposefully, no one ever stopped to consider the obvious and far-reaching ramifications of constructing 55 nuclear reactors on the most seismically active piece of property on planet Earth!  And, that doesn’t count another 12 reactors in various stages of planning or development
(See the list and location of all 55 operating nuclear reactors at link below).

After reviewing this website the obvious conclusion is that such a policy of nuclear energy proliferation was forced upon a nation which had previously been the victim of the greatest nuclear holocaust in recorded history (and one that very few refer to as such).  It must be that even the highly environmentally aware Japanese temperament eventually gave into such a suicidal strategy to keep the candles lit.  But, “Oh! What awesome and devastating consequences to nation, continent and planet!”

Should anyone want to delve more deeply into just who it was that profited from these nuclear-power-ventures-gone-awry, peruse the roster of American, British and French companies (Japan’s first nuclear reactor was built by the British firm GEC at Tokaimura, Ibaragi Prefecture), contractors and consultants who have sold (and serviced) these fatally flawed nuclear reactors to Japan over the past few decades.  Whoever does run the plantation gets to dictate the terms of how it will be administered.  In the case of nuclear energy production there are few which hold the upper hand like General Electric has for so many decades; we’re talking about the grand-daddy of ’em all.  The following two links relate the very serious design problems attributed to the GE unit which is now experiencing a catastrophic breakdown at the Fukushima Daini plant: 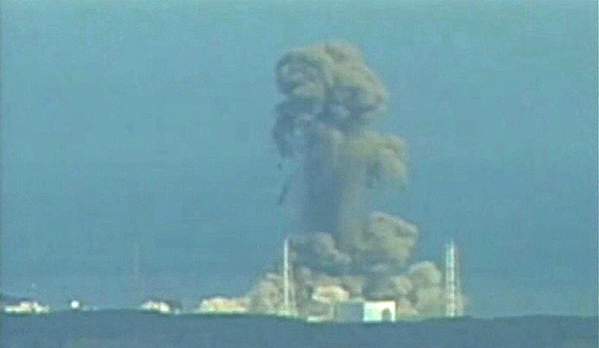 One of three explosions at the Fukushima Daiichi nuke plant

The faculty of reason has fled humanity; common sense is now quite rare.

Certainly there is much more to this story, but we sincerely hope that this new picture has by now replaced the old one.  At the end of the day, and most certainly by the end of this deteriorating saga, one conclusion will surface from the earthquake and tsunami which tested the might and mettle of modern technology.  It is this: When humankind so casually eschews its God-given faculty and ability to reason, and subordinates good ole fashioned common sense to the gods of technology and greed, it does so at its peril.  Great peril!

As previously stated, but well worth repeating, when the decision-makers chose to site and build fifty-five (55) nuclear reactors on the most earthquake-prone stretch of land on the globe*, they simply sealed the fate of the Japanese people.  About this we are very saddened and deeply troubled, as it was through US domination that such a state of affairs was allowed to prevail.  This, not that long after a wartime nuclear annihilation of two entire cities on the same island nation we know and love as Japan.

*Does anyone in their right mind believe that nuclear power plants can ever be designed, engineered or constructed to withstand 9.0 earthquakes followed by 15 meter high tsunamis?  Sorry if we offend, but such a display of so deadly a combination of ignorance and arrogance must represent the very height of hubris.  Particularly in view of the inevitable consequences which have manifested at Fukushima, how is it that so few saw this pre-ordained and disastrous outcome, except by willful blindness?

A belated yet very sincere apology is offered. Now, how do we make amends?

We offer our profound apologies for all the American people who were a party to this inhuman behavior.  We likewise ask for your forgiveness, not only for our WWII transgressions (read calculated atrocities) against your nation and people, but also for the behavior of our corporations which have wrought so much hardship throughout your country.  To whatever degree those of us were unwitting parties to your destruction, we express our deepest regret and genuine remorse.

We send our fervent prayers and heartfelt blessings to every single person of Japanese descent, as we offer these to all affected by this terrible manmade tragedy.  Please know that we will spend our remaining days in sincere repentance for what ails the great People of Japan due to our national and individual conduct.  We will likewise do everything within our power to make amends to all of you who suffer because of the material and very shortsighted gain acquired at your expense.

May God bless you and your entire nation, and keep you safe.  To the greatest extent possible, may He keep you free of all suffering.  And may your hearts be full of forgiveness and free of anguish during these tremendously trying times.

With great respect and deep concern,

Author’s Note:
The author of this open letter was chosen by his 5th grade teacher to participate in a debate and told to speak on the 3 person panel in favor of dropping the atomic bombs on Japan during WWII.  This teacher was perceptive and knew that the pro bombing panel would win the debate, which they did,  because of my ability as a persuasive wordsmith and “accomplished” debater.  However, relishing the victory soon gave way to a sense of deep regret about having advocated a position that was completely contrary to my very being.
From that day forward, when the awareness set in that through my own behavior I, too, became complicit in one of the greatest misdeeds of all time, I vowed to look for any opportunity to right this wrong.  I pray that I have done just that through the posting of this open letter.

CAVEAT:
We do live on a plane of existence that allows for the exercise of free will according to the laws of karma, where the inviolable law of cause and effect is operative.  Therefore, look to the notion of BLOWBACK to govern where and when and how the winds will blow, especially from west to east.  Chernobyl provides a good example of how radiation spreads on a land mass as described in the link below.  While the island of Japan will bear the brunt of the Fukushima meltdowns, eventually the ocean winds will disperse the radioactive fallout around the globe, as the Pacific Ocean will disperse the radioactive seawater.

Radiation disasters due to nuclear meltdowns (e.g. Chernobyl) spread over vast territories and impacted many millions.

This entry was posted in Uncategorized. Bookmark the permalink.

39 Responses to Japan: A Nation Consigned To Nuclear Armageddon